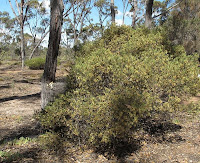 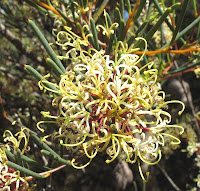 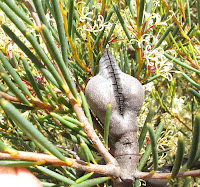 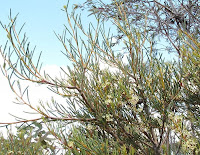 This Hakea is yet another of the many diverse species in the Esperance region, although you would not want it for your garden, as not only does it have prickly foliage, but the flowers give off an odour that is very similar to vomit. This is a tactic to attract the pollinators, which in this case are probably flies. To appreciate these plants, you must bear in mind that they have not the slightest interest of what Homo sapiens think of them, their sole concern is reproduction and survival and (to us) the offensive floral odour, is an essential element in this regard. Hakeas have an interesting and highly successful range of tactics to ensure they will be around for a long time, including habitat adaptation, deterring herbivores, attracting pollinators, ensuring seed survival and germination.

Hakea commutata is a bushy shrub to 3 metres (10’) in height and grows as scattered plants under tall eucalypts in the heavier soils, often over granite. These environments tend to be moderately wet in winter and dry during summer, which is a very harsh habitat suitable only for a limited number of species, of which these hakeas tend to out-survive most others, invariably remaining as the dominant lower story vegetation.

The flowers bloom together, so do not have a particularly long flowering period, but are recorded between September and November. The plants above were at Mt. Ridley, which is within its preferred dry mallee zone 65 km (40 miles) NNE of Esperance, here the average summer temperature is 25% greater to 30C (86F) and the average annual rainfall 33% less to 400 mm (16”), than coastal Esperance, thus making Hakea commutata a very hardy and successful species.