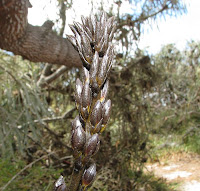 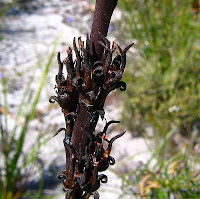 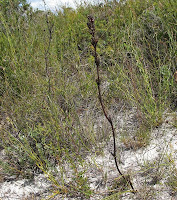 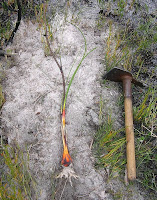 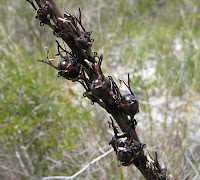 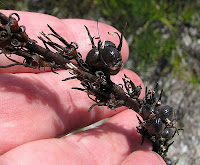 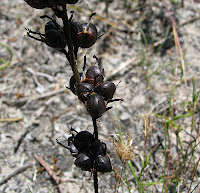 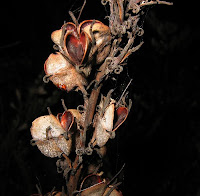 The Bloodroots (Haemodorum) are related to the Kangaroo Paws (Anigozanthos), both belonging to the family Haemodoraceae, but apart from the long annual flowering stem, they are otherwise very different. They are called bloodroots due to the color of the red bulbous root, which was commonly eaten by aborigines and is apparently quite spicy. I should add (like all wildflowers) they are protected these days and one was only dug-up to provide a specimen for the Perth Herbarium, who require the leaf connection to the rootstock, which necessitated collecting the entire plant.

There are three known Haemodorum species in the Esperance region, which in appearance are quite different from each other, plus they grow in different soils. Haemodorum spicatum would be the most widespread, occurring in light sandy soils, from low-lying flats to the tops of hills. Although in suitable habitat a common species, locally they do not form dense colonies, but grow as scattered individuals or in small groups.

Haemodorum spicatum each year usually produces 2-3 round (terete) tough green leaves (around 60 cm or 2’ in length), which remain alive and exposed for several years to form a loose rosette of lax different aged foliage. In most years, a single flower spike (rarely two) forms and can grow to over a metre (4’) in height. These and the flowers are coloured dark brown to black with the floral part occupying the upper half and several black pointed leaves the lower.

The flowers mature from the bottom up, so seed is invariably forming at the floral base, whilst flowers near the top have yet to bloom. I have never seen a bird visit these plants, so presumably they are insect pollinated. The flowers are certainly not what you would call attractive, although bloodroots are very interesting plants and structurally appealing, plus there is nothing else looking remotely like them. They thrive in fire prone areas and all produce flowering spikes after one, which being a metre in height, tower over other regenerating vegetation. Flowering is recorded from October to January.