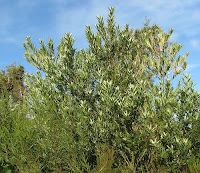 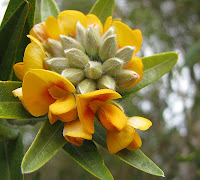 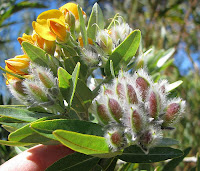 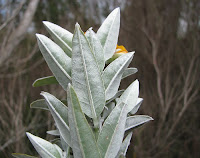 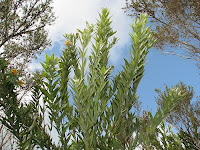 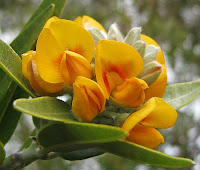 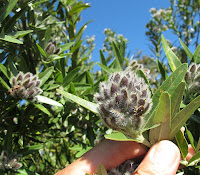 Callistachys lanceolata was known as Oxylobium lanceolatum and is the only described plant in this resurrected genus, differing from other pea-flowers by the seed pods that open at the top to release the seed and not down one side, as most pea and wattle pods. Commonly called the Native Willow or Greenbush, it is a handsome species growing rapidly to 3-4 metres (12’) in height, but is also known to grow into a small tree to 7 metres (24’) elsewhere. The leaves are as the botanical name suggest, a lanceolate (arrow-head) shape, although they can vary considerably from linear to elliptic in outline, but are all covered with soft silvery hair, with one of these forms (at the base of a granite outcrop) being considered as a new species.

In the Esperance region they are not common and very localised to habitat. These are usually in wet areas down-stream from strong seepage or run-off in non-calcareous sandy soils (probably with a clay substrate), where they form small thickets, although I would imagine in the right habitat, they could develop into more extensive ones. Many years ago I grew this plant in a garden, where with regular watering, it did very well in a well-drained sandy soil overlying clay, so it would likely grow in drier conditions but with a higher rainfall. These conditions exist in the milder climate in the SW of the State where the Native Willow is more common.

I have seen honeyeaters feeding from the flowers, but do not know if they are the main pollinators or just trying them out. Flowering locally is dependant on rainfall, but can be from September to January, although most have usually finished by the end of November, to be replaced by the not unattractive globular bunches of soft hairy seed pods.