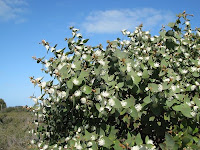 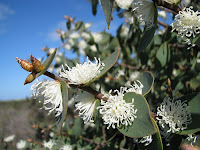 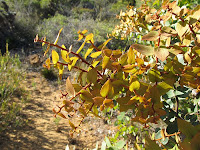 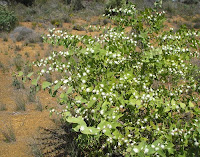 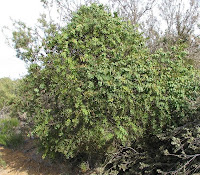 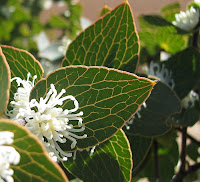 Hakea ferruginea
Most colonies of Hakea ferruginea are to be found to the west of Esperance, commencing near Quagi Beach (50 km or 30 miles from Esperance), to the other side of Albany in near coastal habitats. This species generally favours gravel soils or sand over gravel, but also in acid sandy loam over limestone where no doubt it is attracted to the better water holding properties of the rocky substrate. Hakea ferruginea will grow as a rounded bushy shrub to over 4 metres (14’) in height, although locally 2-3 metres (8’) would be more usual. It is commonly found on flats, hillsides and low-lying areas.

The species name of ferruginea refers to the color of the attractive rusty orange new growth, although this coloration is not unusual among Hakea, Banksia and other Proteaceae species. The foliage is the distinctive feature however, growing stiffly at right angles to the branch with neat pale veins that are highlighted when viewed against the light. The leaves end in a hard point, but seldom penetrate the skin, although they may scratch.

The white flowers are tucked into the base of the leaves and are insect attracting. Flowering is recorded from July to November, but locally they tend to be from September to November, although in a drought year they may bloom earlier.