There are two subspecies of this Smokebush in the Esperance region and although they overlap, subsp. leianthum occurs mainly to the north and west of Esperance, whereas the other subspecies, subsp. orientale is (apart from a the odd western colony) mainly found to the NE and east of the township. The main difference between them is with the length of the leaves and the density of the flower clusters. Subsp. leianthum has leaves that are 10 cm (4") or more in length, with an open inflorescence, whereas the leaves of subsp. orientale are less than 10 cm in length and the inflorescence more compact. As they can appear very similar when viewed separately, I have restructured this post to include both subspecies to enable a direct comparison. 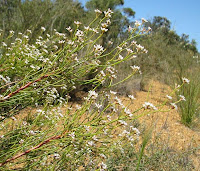 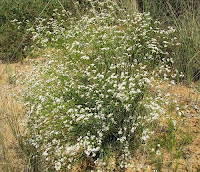 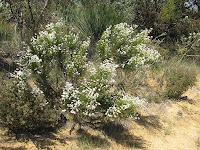 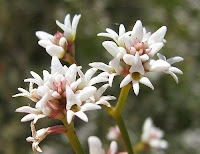 This is the most common subspecies to the east of Esperance and can be found in deep sandy soil or shallow sand overlying gravel, favouring soil disturbance along roadsides or the aftermath of bushfires, when competing tall vegetation has been reduced. However they blend into surrounding vegetation when not in flower and are easily overlooked. During the first few years when the shrub is less than a metre in height, it is a reasonably compact rounded shrub, but as it matures, the upright branches begin to spread and often bend down to the ground with just the tips turning upright.

The numerous cream/white flowers of both subspecies are less than a centimetre (1/4") in length, but flower over several weeks and can be quite showy. Like other local Smokebush species, they are pollinated by insects, attracted by a subtle sweet fragrance. Flowering of subsp. orientale is usually from September to December (a longer period than subsp. leianthum). 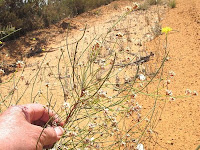 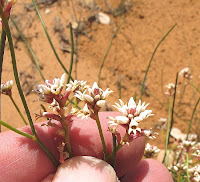 This subspecies mainly occurs to the north and west of Esperance and prefers the drier and heavier gravelly soils. It has noticeably longer leaves always above 10 cm (those in the photo were 20 cm in length), plus the flower clusters are more widely spaced. Flowering, possibly due to the drier habitat, is generally shorter than the other subspecies, being mainly October and November.