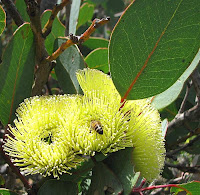 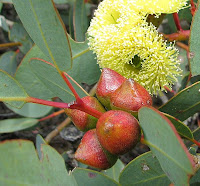 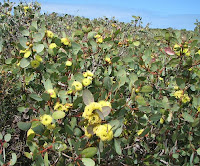 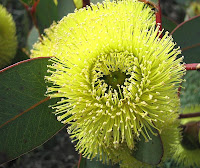 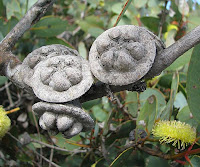 Described in 1995, this subspecies occurs in a handful of locations to the west of Esperance, with the main one 55km or 34 miles away at Quagi Beach. Here it is very common and grows as impenetrable thickets over several hectares on shallow white sand over limestone. Mostly the multi-trunk (mallee) shrub-like eucalypts are around 1.5 metres (5') in height, but in hollows or sheltered from strong coastal winds can growth to twice that height.

The large greenish yellow flowers (5 cm or 2" diameter) are quite spectacular and mass towards the outer branches. Depending on the reliability of seasonal rainfall they can bloom from August to November, with odd flowers blooming at other times too. The above photographs were taken during the latter part of September.

Eucalyptus preissiana subsp. lobata has a Priority Four - Rare Taxa rating, which means although it is rare, it is not threatened by any identifiable factors.