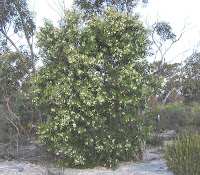 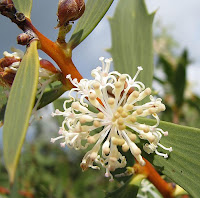 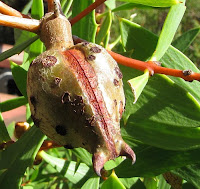 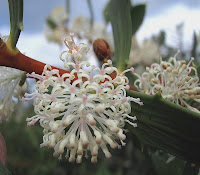 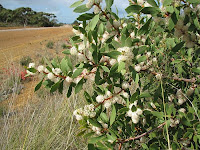 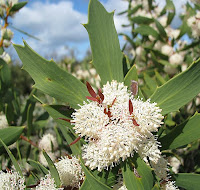 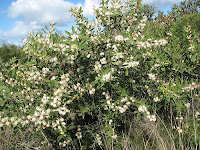 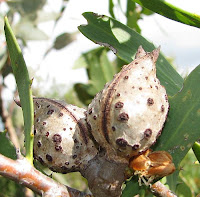 Hakea nitida is a handsome, highly adaptable spreading shrub or small bushy tree that can be found growing in sheltered coastal calcareous sand, further inland on non-calcareous sand, on gravel, or in the mallee on clay loams over limestone. This hakea is also adaptable to exposure, sometimes shrubby to 2 metres (6'6") in open windy conditions, to twice that height in shady woodland. Like most hakeas it has a liking for moisture, but will lie dormant during hot dry summers with no apparent physical deterioration.

The impressive broad 10 cm long (4") leaves, are a bright pale green, thick and shiny. They are also armed with several rigid spines, so care is required when handling. The flowers are mainly white, but sometimes pale pink and form fragrant, chunky, dome shaped floral clusters along the branches. Although birds do visit the flowers, insects would probably be the main pollinators. The resulting warty seed capsules from such a union, have a bloated base combined with a narrow double pronged top, giving the appearance of a squatting frog about to jump and hence its common name of Frog Hakea.

Hakea nitida is a widespread plant, although seldom forming substantial colonies or occupying large tracks of land. Flowering is recorded from July to September, but being widely distributed from the coast to inland mallee regions, this would depend on location and timing of local rainfall. Around Esperance August to October would be more the norm.