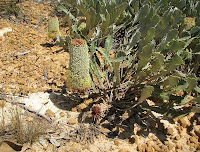 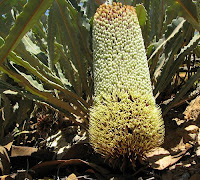 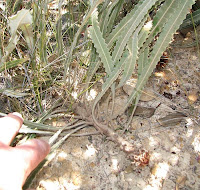 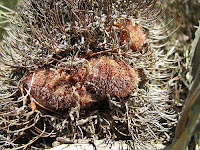 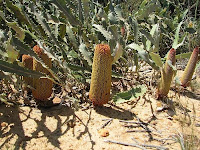 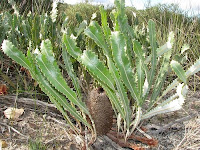 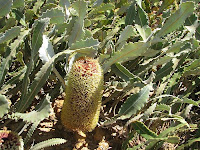 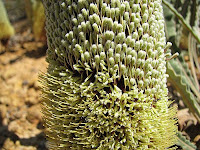 Banksia petiolaris is an attractive prostrate shrub that can cover an area of several square metres, although it is impossible to tell if other plants are growing with it. These clumps with their near vertical lightly lobed grey/green leaves are quite distinctive in its small-leaf heathland habitat and will draw your attention even when not in flower.

It grows in well-drained deep sand, or sand over gravel in relatively flat or gently undulating country, from around 100 km (60 miles) west of Esperance, to 40 km north in the wheatbelt (south of Mt Burdett), and progressively to the heaths of Israelite Bay 200 km east of Esperance. It is not particularly widespread, but once encountered it is often very common, occurring in extensive colonies.

Unlike some other prostrate banksias, the branches of Banksia petiolaris are above ground, so when periodic bushfires pass through the plants are killed, but grow again from the seed held in the fire resistant follicles that open to release it once the fire has passed. They germinate quickly and are quite fast growing, so it is not long before new plants are once again producing flowers and seed. In the act of reproduction they are helped with pollination by birds and probably the Honey Possum, plus invertebrates possibly play a part.

Flowering is from September to December, although they tend to begin and finish a little later in a good rainfall season when the soil surface has completely dried and less likely to become seriously wet from further rainfall.