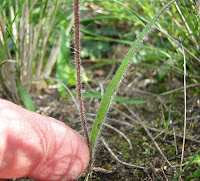 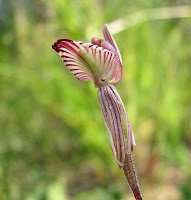 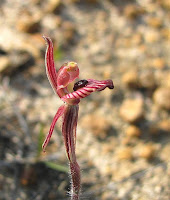 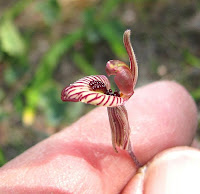 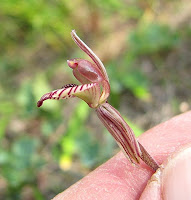 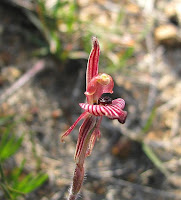 A widespread orchid growing on a variety of soil types, with those photographed above in sand over granite and on gravel. This species is mainly coastal or near coastal, whereas a similar looking species the Dwarf Zebra Orchid - Caladenia pachychila has a more inland distribution, however they do overlap to the north of Esperance. Caladenia cairnsiana tends to be a little taller (to 30 cm or 12") and has more pronounced red stripes on the labellum. Also the lateral sepals and petals hug the ovary, whereas with Caladenia pachychila they are more spreading. The labellum is held more vertically with C. cairnsiana, whilst C. pachychila is more horizontal. And as the name of the Dwarf Zebra Orchid, Caladenia pachychila indicates, the callus at the end of the labellum is thicker lipped compared with the similarly placed callus on Caladenia cairnsiana.

As with a number of terrestrial orchids these species are apparently pollinated by small wasps that are attracted to the flowers by their release of pheromones similar to sexually receptive female wasps. The thick black calli in the throat of these orchids would no doubt appear to the male wasp like the female and upon landing in order to mate, would brush against the anther to carry the pollen to the next orchid flower it is deceived into alighting.

The flowering period of Caladenia cairnsiana is recorded from August to November, but this would depend on location and seasonal rainfall as these factors can vary flowering times considerably.