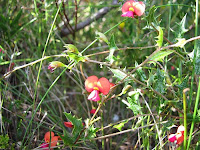 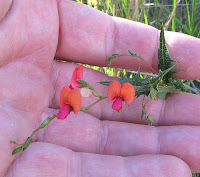 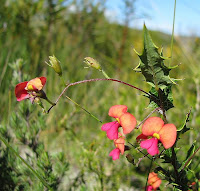 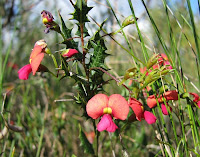 A small open holly-leaf shrub to around 30 cm (12") in height, with weak stems that rest against other vegetation, or hang into open spaces near the ground. In the Esperance region I have only encountered it on calcareous stabilised (well vegetated) tertiary dunes (where it can be very common), or over limestone. The bright orange and red flowers compete for their pollinators attention amidst other similarly brightly colored pea-flowers, such as Chorizema aciculare and Kennedia prostrata.

With such a common and widespread species in its coastal sand dune habitat, flowers can be found over several months from July to October, although August and September would their peak flowering period.