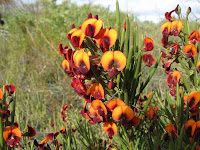 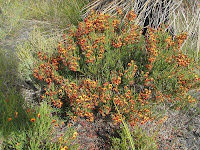 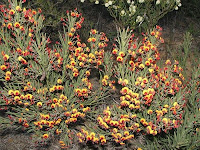 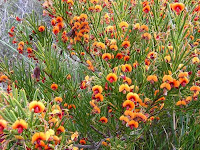 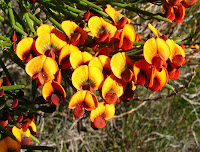 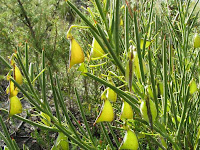 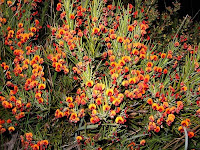 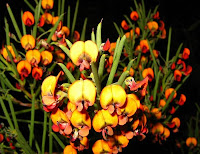 Daviesia is an Australia wide genus of pea-flowers and although most do not have a common name, they are collectively known as Bitter-peas. If you bite into a leaf, the reason they are so called soon becomes apparent. However, not something you want to try with Gastrolobium species as these harbour the deadly 1080 poison in their foliage.

Another distinctive feature of Daviesia plants is the shape of their seed pods, although varying in dimension, they are always bloated and a broad triangular shape, rounded at the middle and ending in a point opposite the calyx. Despite developing many pods, my investigations indicate with this and other species, most if not all are empty with no seed development. This suggests to me a lack of suitable pollinators, which may reflect poor land management like overgrown habitats that have not been burnt for many years. The lack of periodic burns of fire-dependant vegetation (heath in this instance), means many small plants are smothered or will not flower and their pollinators that Daviesia may also need, must go elsewhere to survive. Although this plant is far from endangered, it does illustrate the fragile relationship between plants and animals and the need to consider the wider ecological picture to avoid serious consequences over the longer term.

Daviesia teretifolia as its name suggests, has round (in cross section) leaves, plus a sharp point at the apex, so not easily handled. But whatever it lacks in the leaf department, it is more than made up for on the floral front, with brilliantly coloured flowers that are produced in spectacular number to produce very eye-catching displays. It commonly grows in low-lying areas around ephemeral swamps and flood plains, or on level ground where rainfall is slow to drain. Soils are usually low pH sand or gravel that are commonly found in coastal heath and the inland wheatbelt zone.

This Daviesia is very common in the Esperance region and can flower anytime from May to October, but is influenced by the timing of seasonal rainfall, eg good autumn rains will see them flowering earlier. Locally, June to August is usually the best period for floral displays.

Update 1/03/10 The WA Herbarium has recently amended their classification of several flora families in line with current common practise. In this instance the Papilionaceae family is changed to Fabaceae. There are no changes to genera or species as a result of this update.