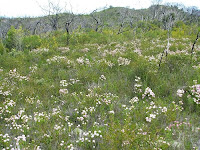 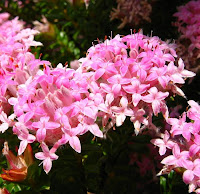 In the Esperance region, the Pink Rice Flower is a very common shrub growing to around a metre (3') in height, but is usually much less and mostly restricted to coastal calcareous sands, particularly on stabilised tertiary dunes. In WA it is also very widespread ranging from the Nullarbor to near Geraldton, a distance of around 1600 km (1000 miles). Pimelea ferruginea is recognised by many home gardeners not only due to its prolific and long-flowering habit, but because it is one of the most popular Australian garden plants, and as testament to this popularity, the Pink Rice Flower can even be seen in gardens where the home owners would not knowingly plant an indigenous species that might conflict with their roses and rhododendrons.

In an open situation, the Pink Rice Flower is fast growing and develops a compact dome shape thanks to radiating soft flexible branches that are attractively clothed in neat bright green oval/elliptical leaves, arranged in two opposite rows (decussate), and atop is a head of bright long flowering pink flowers. Therefore with such virtues, it is not surprising Pimelea ferruginea has been so commercially successful.

Flowers vary from pale to deep pink and some commercial forms are quite reddish. I have also encountered the odd white flowering form too, but these are rare. Flowering occurs from August to February and as these plants can be locally dominant (particularly after bushfire) many grand displays are available for the rambling wildflower enthusiast.
Posted by William Archer at 6:24 PM