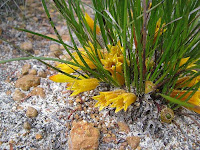 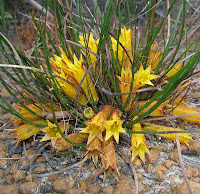 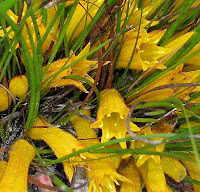 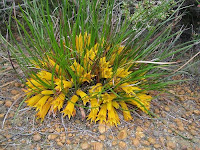 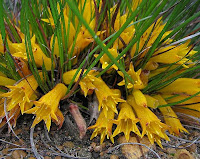 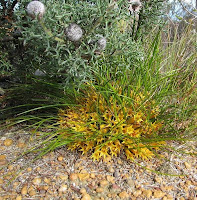 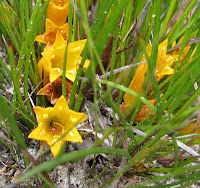 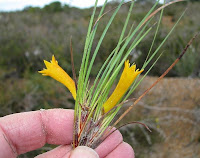 There are around 80 species and subspecies in the endemic Western Australian Conostylis genus. Conostylis bealiana would be one of the most attractive, with striking golden tubular flowers to 4 cm (13/4") in length, which for this reason is grown commercially for the home garden, and promoted as 'Yellow Trumpets.' It grows as a small tussock grass-like plant to 30 cm (12") in height and around 20 cm (8") in diameter, and as shown above, can explode with flowers.

This floral display is not for nothing, but to attract honeyeating birds who thrust their beaks and faces far into the flowers throat to become covered in pollen, which then pollinates other flowers when the process is repeated. Although the flowers tubular part (corolla) is a deep yellow, externally it is densely covered in short hairs that can vary in color to take on orange or red hues. This plant is very common in the Esperance region, growing in a variety of well drained soils that support heathland vegetation. The best displays are where there has been topsoil disturbance or a recent fire. Once the taller vegetation becomes established it smothers these small plants, except those on the edge of natural openings where they can access sunlight.

Flowering is from July to September with the main period during August.