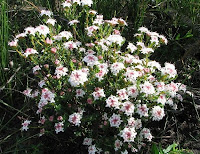 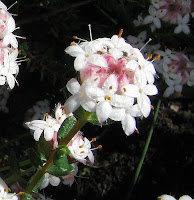 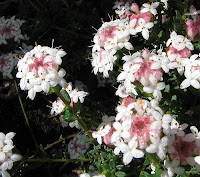 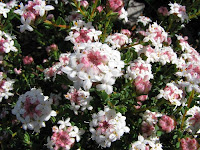 There are numerous Pimelea species in WA, which vary from the small and insignificant to the large and spectacular and can be found in many domestic gardens in company of other indigenous flora. Most species have not been given a common name, but the group as a whole are generally referred to as Rice Flowers. They do not have petals, but petal-like sepals that surmount a long floral tube.

Pimelea brachyphylla is a common and widespread species around Esperance, particularly in disturbed areas or where it has recently been burnt, but generally is found in habitats associated with heathland vegetation. It can grow to a metre (3') in height, but is more often around half that size. If not restricted by other vegetation it forms a compact rounded shrub and will reveal its neat opposite (decussate) foliage. Some varieties (like the one above) are bright pink in bud, but open to a sparkling white four petal-like flower to form attractive multi-flowered heads. These heads are subtended by green bracts, which have red margins and being a diagnostic feature, can be used as an identification aid.

Flowering is anytime from June to October and if you are fortunate you may see the butterflies who do most of the Pimelea genus pollination, although moths and other insects with a proboscis long enough to reach the end of the floral tube would also contribute.