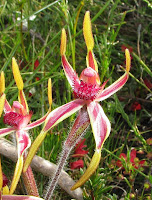 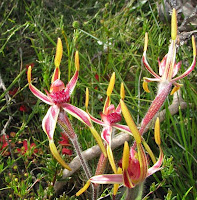 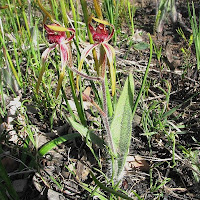 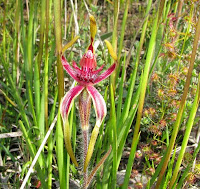 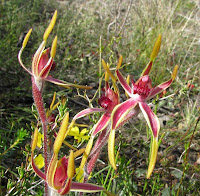 A recently described (2001) Spider Orchid and considerably more common in the SW of the State, particularly around Busselton. In the Esperance region it is mainly found immediately to the north of the town and further to the west, although it is nowhere common and has a Priority Four rating (rare but not endangered). The orchids above were discovered by a couple of flora enthusiast (Lyn and Eric) from Tasmania who kindly advised me of their presence, which was not far from Munglinup (95 km or 60 miles west of Esperance). The habitat was a roadside reserve with a gravel soil, on which grew scattered low mallee eucalypts and heath that had recently been burnt. There were approximately 20 Reaching Spider Orchids sited on the outer edge of the burnt eucalypts and usually in small hollows where rainwater would collect before slowly draining away.

Caladenia arrecta is quite a chunky orchid possibly reflecting the densely packed glandular cells on the outer portions of the sepals and petals. The overall flower depth can be as much as 8 cm (over 3"), although those above were closer to 5 cm or 2", nevertheless as most had two flowers per plant, they made a memorable display. Flowering time is recorded from August to October, although the above had obviously been in bloom during July, however there were still a number yet to flower and others that had just started, so August/September would certainly be the best time to observe these particular orchids.