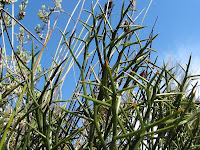 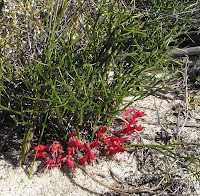 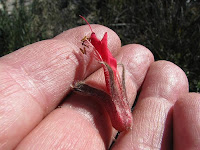 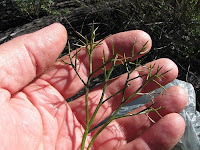 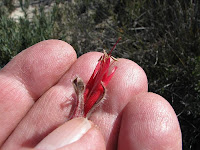 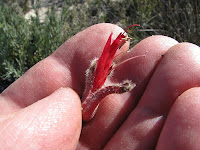 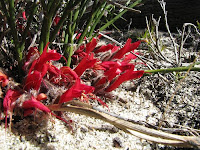 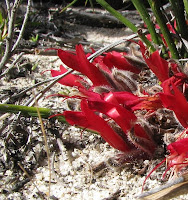 The first time I saw this exotic looking shrub, I thought it was an Eremophila until I countered the ten stamens (only four in Eremophila) and what appeared to be only 4 petals and sepals. I collected a flower and it was not until I got it home and under the microscope did I discover there were actually 5 petals, one being very small and tucked between a pair of sepals that were joined almost to the top, so there it was - a 10 stamen, 5 petal and 5 sepal, non-symmetrical flower, which could only be a pea-flower.

It is aptly named the Upside-down Pea-bush, as the tiny hidden petal was actually the standard, which with most pea-flowers is the largest and most colourful. The Eremophila shape comprised the keel and side petals that formed a curved tube (open on the lower side). The leafless multi-branched spiny stems were well above the flowers and probably sheltered them from the heat of the sun, apparently these stems can grow to well over a metre (over 3') in height, but with the plant above they were only around 30 cm (1'). Birds are the main pollinators and it is thought the flowers have been modified for their benefit, but they would need to land on the ground in order to feed from the bright red flowers.

There are currently 16 species in the Leptosema genus and most have flowers on the ground or placed low on the shrub. The genus has predominantly an inland distribution, with this species growing closer to the coast than most, although in this region occurring only to the West and NW of Esperance, but more common further inland extending as far as Kalgoorlie. It and other members of this genus, have a preference for the coarser sandy soils of which regions with rolling sand-dunes or raised sandy areas would be its more usual habitat.

The above single plant was encountered on the upper sandy banks of the Oldfield River off West Point Road, approximately 175 km (110 miles) WNW of Esperance. Like many pea-flowers and acacias, this Leptosema daviesioides plant probably benefits from periodic bushfires that enable seed germination. The above plant was discovered in a recently burnt area (2-3 years), but was not seen in pre-burn days despite being only 50 metres from an old bush camp of mine. The recorded flowering period is from May to September.