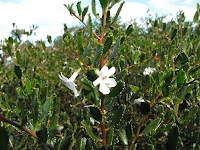 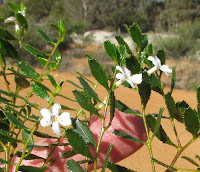 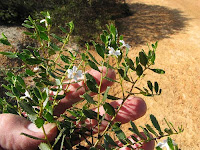 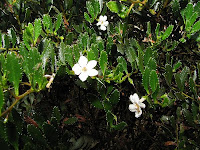 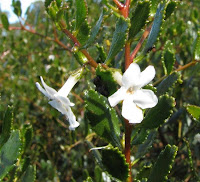 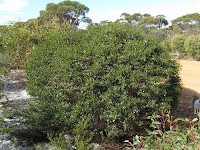 Glycocystis beckeri is the only member of the Glycocystis genus, but is closely related to the large Myoporum and Eremophila genera, the latter commonly known as Emu Bushes. However, in the past due to the difficulties of classification, has been placed in both of these and even into Verbenaceae, but now finally located in Glycocystis, a genus created by Dr R.J Chinnock in 2007. The name refers to the sweet smelling foliage, caused by the exudation of copious amounts of a very sticky resin via small bladder/pouch shaped papillae, that with the exception of the petals and reproductive parts, are everywhere on this plant.

This shrub is confined to an area around Ravensthorpe (175 km or 110 miles west of Esperance). The plants photographed above, were at or near the most easterly portion of its range and around 130 km (80 miles) WNW of Esperance near the intersection of West Point Road and Rawlinson Road. I have also seen this shrub a few kilometres further east along Rawlinson Road. This area has a mallee environment with the typical fine sand/clay topsoil over a limestone substrate, although closer to Ravensthorpe is has been recorded growing on various loams over gravel and in one instance over granite.

The plants above were around 1-2 metres, but can apparently grow to 3 metres (10') in height. Notable with these shrubs was the compact rounded shape and dark green foliage with no extending branches to break the symmetry. Scattered over this deep green dome and on the outer extremities were small white flowers (to 1.5 cm or 1/2" diameter) with several cream spots leading to a similar length floral tube. However, the most obvious feature is the extremely sticky nature of this plant that covers almost everything in a mild sweetly odorous carpeting resin layer.

The shrubs highly viscid nature makes me wonder for what reason, it may be to deter grazing animals, or to conserve moisture (viscid plants are not uncommon in drier regions). On searching the internet for clues I came across an interesting study of a small viscid South African plant, which although lacking the digestive enzymes required to consume insects whole (like the carnivorous Drosera plants), but traps them to just absorb the nitrogen from their excreta via an adaptation of its leaf structure ( http://aob.oxfordjournals.org/cgi/reprint/mci082v1.pdf). From a small plant specimen I took from the Glycocystis shrub, under the microscope there were a number of trapped insects that had died in the resin, including an ant, fly, wasp and a bee, all were supersaturated in resin rather than just at the point of contact. Probably an interesting study here to find the ecological reason for this resin and its excessive production.

Pollination of such a plant must present problems for insects, as they can only land or hover at the flower and not touch any part of the surrounding foliage, for to do so would cut short its life, which from the plants point of view is not particularly effective in its desire for cross pollination. Consequently I would imagine it has very specific relationships with certain insects, like those that hover as do some flies and wasps. Dr Chinnock in his book 'Eremophila and allied genera' notes,' small hover wasps, honey bees and two species of butterfly were observed feeding on the flowers.' The neat rounded shape of the shrub with no extending branches, plus having the flowers on the outer perimeter would assist these pollinators from accidentally coming in contact with the resin. As for seed dispersal, I would imagine the Emu would do the job, as it does not need to touch the plant other than to remove the non-sticky fruit, however many out of reach seeds must fall to the ground and might explain the often small compact colonies.

Flowering is recorded from May to November, but can also be found at other times, particularly after rain. As many insect attracting flowers emit an ultraviolet light that we cannot see, it would be interesting to see what Glycocystis beckeri would look like through insect eyes? I imagine it would be like a brightly lit Christmas Tree.

Posted by William Archer at 2:37 PM