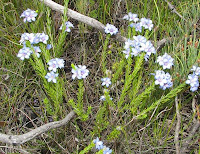 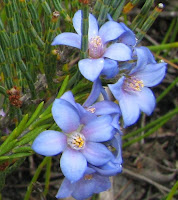 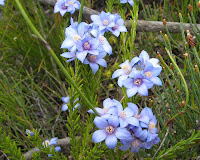 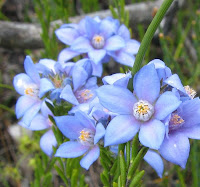 The Blue Waxflower was previously known as Eriostemon nodiflora, but was revised in 1998 when most were reclassified to the genus Philotheca. The genus Eriostemon still exists, but now has only a couple of species, neither in WA. Apart from differing stamens, the most obvious distinction between the two genera, is Eriostemon has several separate nerves in the petals, whereas Philotheca has only the one, although this may be branched.

Philotheca nodiflora has 4 subspecies, but only the subspecies lasiocalyx occurs in the Esperance area and has smaller flowers than the others, being 1-1.5 cm (1/2") diameter, the others are up to twice that size and because of this are grown commercially for the home garden. Nevertheless, despite the local subspecies smaller flowers, it is still a very pretty plant.

Philotheca nodiflora subspecies lasiocalyx is a small open shrub to one metre, but usually only half this height. Small plants if accidentally cut-back can be quite bushy with a prolific number of terminal flowers. This species is not widespread in the Esperance district and is only recorded a few kilometres to the north of the town and also to the east. The ones I have encountered have been in a low-lying sandy (non-calcareous) heathland area, which would provide a moist but well drained environment. Flowering is prolonged and can range from August to January.