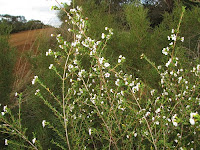 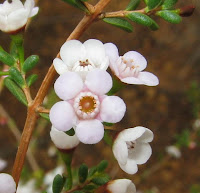 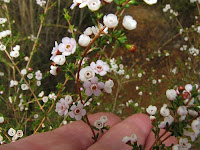 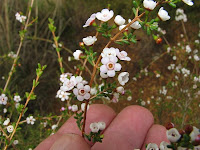 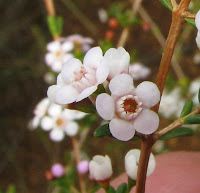 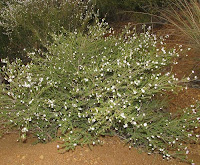 Although called the Stirling Wax, Chamelaucium ciliatum is a very common small shrub between Israelite Bay 175 km (110 miles) east of Esperance, to Albany 400 km (250 miles) to the west of Esperance and is particularly common around inland mallee districts. Here it grows on a variety of soils, with a preference for slightly heavier ones, although it can also be found growing in low-lying sandy areas.

Such a widespread species like the Stirling Wax can be quite variable, with some of the more spectacular forms being introduced to home gardens. Shrubs are usually around a metre (3') in height and will happily grow in full sun or semi-shade. The foliage (aromatic when crushed) and flower size can also differ, with leaves commonly around 5 mm (3/16") and flowers around 10 mm (3/8"), although both are often smaller. Nevertheless, large flower numbers and an extended flowering period more than make up for any lack of individual blossom size.

Initially flowers are white, waxy and long lasting, with any floral pink flushes gradually darkening to deeper shades and providing there is regular rainfall, the Stirling Wax will progressively produce new flowers and bloom for most of the year. 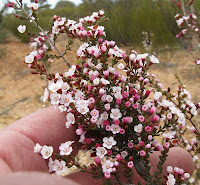 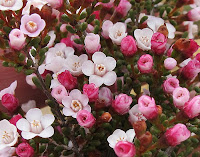