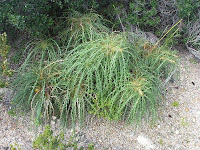 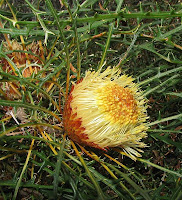 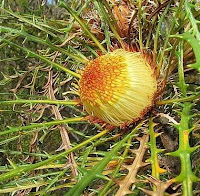 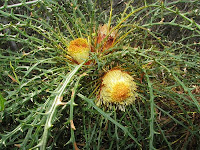 Previously known as Dryandra longifolia, Banksia prolata is a very attractive Proteaceae species endemic to the Esperance district. There are three subspecies and all of them are listed as Rare Flora. Subspecies calcicola, has a Rare Priority One listing, which represents plants known only from a small number of colonies and in this case also of limited distribution, consequently they are under serious threat from a variety of factors. Banksia prolata subspecies calcicola is only known from the immediate area of Esperance from Dempster Head to the Twilight Cove area, an overall distance of less than 10 km (6 miles).

The other two subspecies occur to the east of Esperance with the closest being at Cape Le Grand. This is Banksia prolata subspecies prolata that was previously known as Dryandra longifolia subspecies longifolia. It has a Priority Three, Rare Flora listing that means it is known from several populations and although not considered to be in immediate danger, further research into the species is required. It is only known from scattered colonies from Cape Le Grand to Cape Arid, plus on Mondrain Island (approximately 20 km or 12 miles SSE of Cape Le Grand). If differs from subspecies calcicola by growing to twice the height (to 3 metres or 10') and having substantially larger flowers and longer leaves.

The remaining subspecies is known to only occur at Mt Ragged 145 km (90 miles) ENE of Esperance and is referred to as Banksia prolata subspecies archeos. This subspecies has a Priority Rating of Two, which means it is known only from a few colonies and although not regarded as being in immediate danger, further field surveys are urgently required. The flowers are similar in size to subspecies calcicola, but the floral bracts are recurved instead of being straight. And apart from other less obvious features, it is also a little taller, growing to around 2 metres (over 6') in height.

Banksia prolata subspecies calcicola is a rambling shrub to 1.5 metres (less than 5') in height, with an attractive undulating foliage that lifts and falls with the aid of arching branches. The flowers are around 3-4 cm (1.5") diameter and probably bird attracting. The recurved leaves are long and slender with sharp triangular lobes spaced along both sides, the straight part between the lobes run parallel to the central leaf vein. The latter feature easily separates the Banksia prolata group from the Banksia armata group ( http://esperancewildflowers.blogspot.com/2008/12/prickly-dryandra-banksia-armata.html ), which although similar, are quickly distinguished by having the part between the lobes angled to the central vein.

The subspecies calcicola, grows in shallow sand over limestone, which in turn may overlie granite. They occur as low spreading shrubs in coastal locations that are exposed to strong winds, to taller specimens in more sheltered positions amongst higher vegetation on protected slopes of large granite outcrops. The flowers are recorded blooming from July to September.