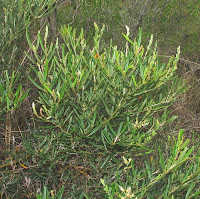 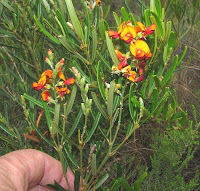 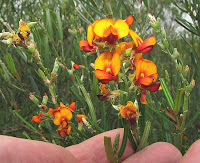 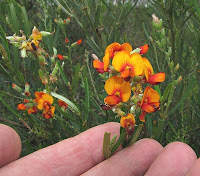 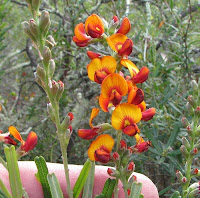 Gastrolobium musaceum is a member of the Gastrolobium parviflorum group that partly include G. discolor, G. melanocarpum, G. tetragonophyllum and G. parviflorum, which all superficially look very similar to each other and most were until recently lumped together. Just to complicate matters further - they are all to be found in the Esperance region.

This Box Poison is commonly found in near coastal areas (although odd collections have been made in the mallee district), growing on and around granite outcrops and on gravel soils that may be shallowly overlain with sandy soil. It differs from other similar looking species by having the largest flowers (standard 10-13 mm (1/2") diameter), but on a short raceme of less than 25 flowers. The other distinguishing feature is the narrow recurved leaves of only 2-4.5 mm (1/8") wide.

This shrub can grow to 2 metres in height, although it is mostly a little over a metre (4'). Like all plants in the Gastrolobium genus, they naturally produce the 1080 poison and the parvifolium group are regarded as being highly toxic, so by all means admire this attractive plant, but don't try to eat any part of it. Recorded flowering from August to October, but can often be found in bloom at other times, although not as prolifically.