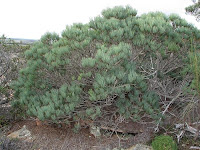 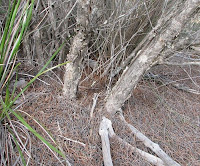 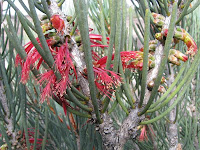 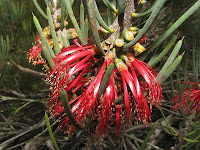 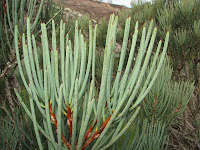 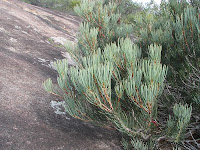 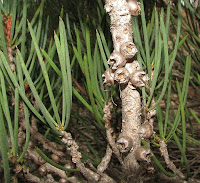 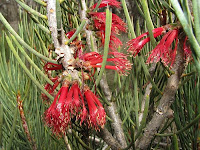 Common to the larger and more sparsely vegetated inland granite outcrops to the north and NE of Esperance. It is a dry country shrub favouring the mallee region with an average annual rainfall of between 200 mm to 500 mm (8" to less than 20"), which in periods of drought can be considerably less. Calothamnus tuberosus is a spreading shrub growing to 4 metres (over 12') in height, although half this size is more the norm. For such a large plant to thrive on these exposed dry rocky outcrops in shallow soils, with roots having to take advantage of every fault, crack and crevice requires special attributes for survival. This it does by having a lignotuber and tuberous roots that store food and moisture for use during hard times.

Interestingly, the distribution of Calothamnus tuberosus overlaps in the southern (higher rainfall) districts with another granite clinging shrub, Hakea clavata that is more common in coastal regions http://esperancewildflowers.blogspot.com/2009/02/coastal-hakea-hakea-clavata.html. Although this Hakea might need a slightly higher rainfall, it is still in a very harsh environment by the bare rock exposure and often completely dry conditions throughout summer. This plant handles these survival problems by producing thick fleshy and moisture retaining leaves to help it overcome the prolonged dry/hot periods.

At first glance, Calothamnus tuberosus looks like a giant version of another one-sided-bottlebrush, Calothamnus gracilis as they both have grey/green upright and rounded (terete) foliage, but on closer inspection they are very different from each other. The leaves of Calothamnus tuberosus are thick and rigid with a very stiff sharp point. These leaves will not give way when brushed against and can easily penetrate skin, so there is a need to approach with care.

The flowers like most Calothamnus species are a rich red and occur in long or short spikes along old growth branches (the length of the spike probably relating to recent weather conditions and the limitations of the habitat). Also they have a long flowering period and providing weather conditions are not extreme, blossom can usually be found somewhere on the outcrop, although November to January tend to be best for widespread flowering.

Honeyeaters are the main pollinators and it is worth mentioning how the flowers are positioned on the shrub. The long sharply pointed foliage would effortlessly skewer the birds should they try to land on top and bend down into the flowers, but flowers form near the leaf base, so birds fly to the flowers side-on and below the foliage tops, to then feed and pollinate between the vertical leaves. However the sharp foliage can still fend off grazing animals that would otherwise readily consume them if they were unarmed. 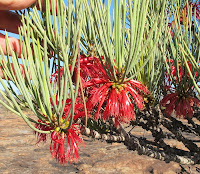 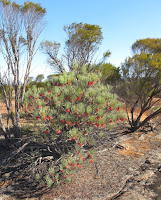