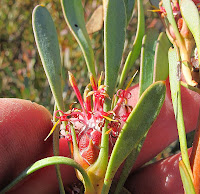 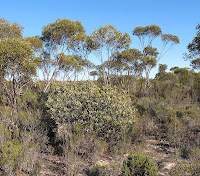 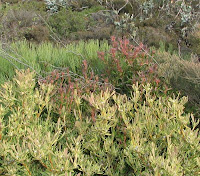 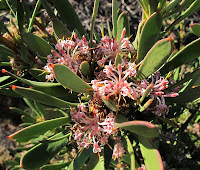 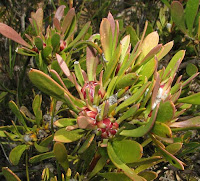 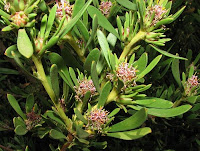 An interesting shrub to around 2 metres (6') in height, with pink flowers and various colored foliage of cream/green, green and pink/red. When first seen, I was sure I had at last come across Isopogon attenuatus (previously recorded for the Esperance district), which is similar to the more common Isopogon polycephalus Proteaceae - Isopogon - Clustered the Clustered Coneflower, but with the main difference being several flower heads in terminal clusters as against Isopogon attenuatus having only the one. However on checking the FloraBase (Perth Herbarium) website, they have redistributed Isopogon attenuatus much further west to the Albany region, now making it 300-400 km (220 miles) out of its range.

This Isopogon keys quite well to I. attenuatus, except for the height (taller), plus the foliage and flower color (pink as against yellow), which are often variable features. However combined with being so far from its now distribution, it must be questioned. There were a number of plants scattered along either side of a roadside reserve, where the soil was laterite and probably quite boggy after rain. Surrounding vegetation was shrubby in a low open mallee woodland. Location was Mills Road, approximately 85 km (52 miles) NW of Esperance.

This Isopogon was just beginning to flower in late May and will probably (along with later flowering plants) continue for another 2-3 months. However this year there has been regular rainfall (although not heavy), therefore with drier conditions the flowering period could easily be delayed.

Update 3/08/09
This species is officially known as Isopogon sp. - Fitzgerald River, which was gleamed from the Perth Harbarium FloraBase website. After another visit to the region, it was encountered in a number of gravel soil sites further west, so would be well recorded.

Posted by William Archer at 7:41 PM