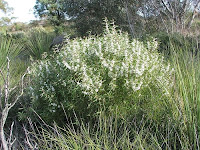 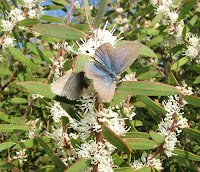 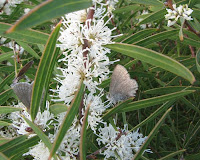 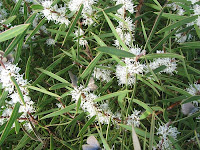 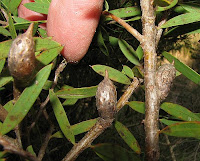 The Proteaceae family is one of the most diverse in the Plant Kingdom, with hakeas being amongst the most diverse of its genera. Hakea marginata may not be the most spectacular, but it does illustrate yet another foliage type and growth habit. When not in flower this one looks very much like an Acacia, with spaced, broad, elliptical shaped leaves, which are very noticeable as they stand on edge and at right-angles to the stem, as do many wattles; the leaves are also thick, particularly around the edge (hence the botanical name of 'marginata') making them quite rigid and unbending. The white flowers are prolific and bloom on mass at the base of each leaf; they must be loaded with nectar as there were hundreds of small butterflies and various nectar eating flies busily feeding from them, whilst I flitted around taking photos.

Hakea marginata is recorded growing to 5 metres (over 16') in height, but in the Esperance district, they seldom grow much more than a metre (3-4 foot). Maybe that is why they are more widely distributed here than is officially recorded (the distribution is recorded in coastal and inland wheatbelt areas, extending to the Geraldton region). From a distance they look similar to other white flowering hakeas that flower at the same time and also in the same habitat, which here are low-lying often boggy areas in gravelly clay or laterite soils. Surrounding vegetation tends to be shrubby too, possibly discouraging plant collectors from investigation of the numerous and widespread low-lying environments in this district, plus as they flower during winter, this may be another disincentive as Esperance is a long days drive from the Perth based State Herbarium.

Flowering is recorded from May to October, but around Esperance (depending on the reliability of seasonal rainfall) late May to August is more the norm.