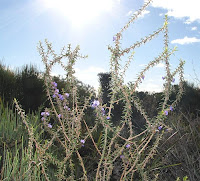 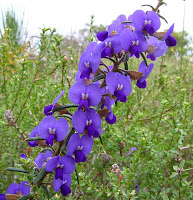 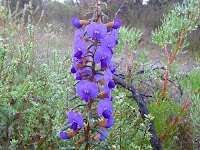 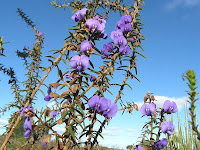 A small open shrub with eye-catching purple to royal blue flowers. It is well named, for as you instinctively reach out to touch this beautiful plant, blood is likely to be drawn from the surprisingly sharp needle pointed leaves, which despite their curved appearance are quite rigid. So you soon learn to admire the flowers from afar. In the Esperance region the shrub is usually well less than a metre (3') in height, but apparently can grow to almost twice that elsewhere, with elsewhere being from the western edge of the Nullarbor to Geraldton, a distance of around 1350 km, or 840 miles (within 100 km or 62 miles of the coast). When not if flower, Devil's Pins is rarely noticed by imperceptibly merging into surrounding rambling heath.

Hovea pungens seldom occurs in large numbers, but is nevertheless widespread in small colonies and showing a preference for low-lying habitats (not swampy), with acid sandy soils overlying a substrate of gravel, clay or limestone, plus supporting a shrubby heathland community. Locally, flowering is usually between May and August, but is recorded (probably in the SW of the State) as late as November. However as mentioned many times before, variation of seasonal rainfall can vary flowering times considerably.