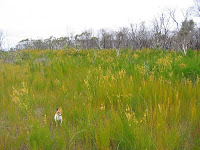 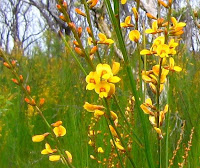 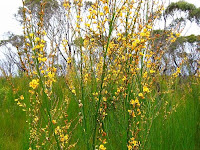 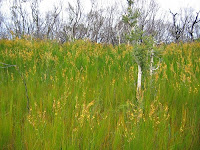 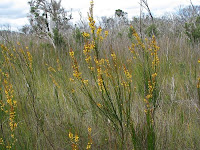 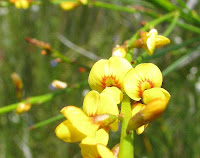 With an Australia wide distribution, ranging from Southern Queensland down the east coast and ranges into Victoria, then onto Adelaide, where there is a very large gap until the Israelite Bay region of WA, where it is reasonably continuous in near coastal districts as far as Kalbarri (approximately 500 km or over 300 miles north of Perth). Interestingly it does not occur in Tasmania, except for a single colony near Coles Bay on the east coast (Curtus & Morris, The Student's Flora of Tasmania. Part 1, 1975), which is surprising as Tasmania was connected to Victoria during the last Ice Age, only 12,000 years ago. The huge gap (1300 km or over 800 miles) of this pea-flower's distribution between SA and WA was no doubt due to the dry conditions of the Nullarbor and surrounding areas. So how did the Golden Spray - Viminaria juncea bridge this formidable dry-land divide?

I have seen other plants with odd distributions between SA and WA where conventional seed distribution was not feasible. To my mind what has happened is not so much the seed gap being bridged, but a continuous population being broken by rising sea-levels during the last Ice Age. Some 35,000 to 12,000 years ago the sea level was more than 100 metres lower than it is today, which would mean the sea would not be crashing into the limestone cliffs along the Great Australian Bight (below the Nullarbor), but would finish several kilometres further south, leaving a wide zone below the cliffs completely high and dry, and well vegetated (as is the case currently, where the high cliffs drift away from the coast in WA, to eventually cease near Mt. Ragged a distance of around 150 km or 90 odd miles).

Viminaria juncea was once known as Viminaria denudata and to the east of the Nullarbor was changed to the former many years ago. WA until recently retained V. denudata, but as no distinguishing features between the east and west Viminaria populations were discovered, it too was also changed to V. juncea, although there are still some unusual WA common names in existence, one being the Swishbush.

Initially growing vertically to 2-4 metres, it may then develop a weeping habit, or just lean untidily. It is extremely fast growing, reaching its maximum height within 2-3 seasons, but like many fast growing shrubs it is short lived and seldom exceeds 5 years of age (although if cut back they can). It is a very slender open shrub, but usually grows in large colonies after fire to create a wall of vegetation, which when in flower is quite eye-catching.

The Golden Spray is seldom found far from freshwater, growing around swamps, watercourses and seepage zones. Flowering can be seen between October and January, although October and November in the Esperance region tends to be the best time to see a mass display.