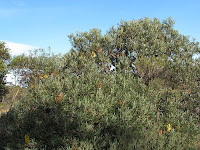 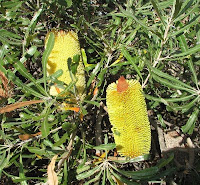 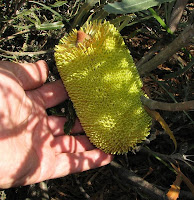 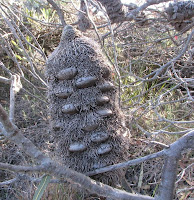 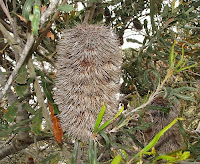 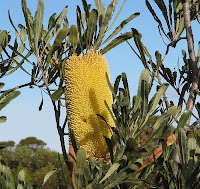 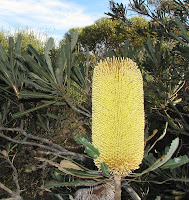 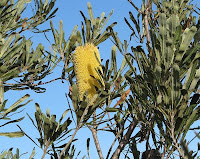 A bushy multi-stemmed shrub, or a tall single trunked tree that can reach 10 metres (over 30') in height. Despite its common name of Southern Plains Banksia, the form above is far more common and widespread inland, growing on sandy islands in a sea of heavier mallee soils. It is also found on slight sandy rises over clays, gravel soils and limestone, and can be encountered in this type of habitat closer to the coast. Associated plants are usually shrubby heath species and less so the typical mallee and coastal vegetation that locally can be more widespread.

Banksia media comes in many forms, particularly in coastal habitats where it is usually shorter and more bushy. It can even grow as a semi-prostrate shrub in very exposed locations. The flower size also varies with the exposed coastal varieties usually the smallest, and the inland ones the largest, where flower inflorescences of 20 x 8 cm (8" x 3.5") are not uncommon. These are colored various shades of yellow and naturally stand out like flags amongst the dark green leaves to attract honeyeating birds who would be the main pollinators. These bright splashes of color are probably important as this Banksia often grows in the drier inland areas where the birds are largely migratory and occupy the wetter coastal regions during summer, but move back into these areas during autumn when temperatures drop and rainfall is more likely. As the Southern Plains Banksia flowers from March to December (depending on seasonal rainfall), their large bright flowers are there to attract passing honeyeating birds and to keep them around in order to pollinate their flowers until summer, when the birds relocate to better watered regions.