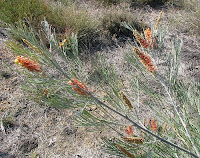 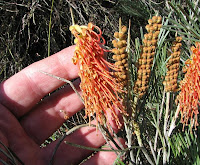 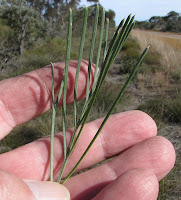 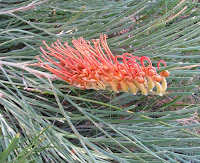 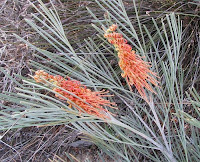 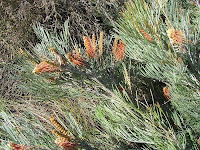 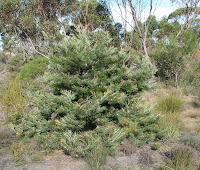 Grevillea baxteri is a very exotic looking plant, being noticeably different from others in its habitat, with no apparent attempt to blend with them. It is a bushy shrub of over 3 metres (10'), although often closer to 2 metres (6'-7'). Not only has it attractive soft, deeply divided foliage, but striking orange/red and cream toothbrush shaped flowers that are eagerly sought by honeyeating birds.

The Cape Arid Grevillea occurs in the heathland of the Cape Arid region, but also in a similar habitat to the north and NE of Esperance, although never in large numbers. It still has a Priority 4 listing for Rare Flora in Western Australia, which means although rare, it is well known and considered to be in no immediate danger, but is monitored every 5-10 years.

Habitat is shrubby heathland with an acid sandy soil usually overlying heavier soils. Drainage would be good, but probably moist for extended periods. Flowering is dependant on seasonal rainfall, but can be from April to December, but odd flowers are invariably found at other times.