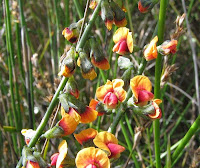 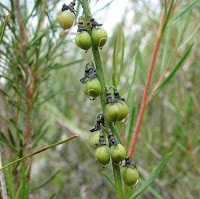 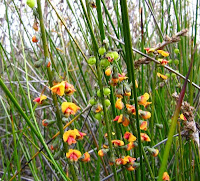 Sphaerolobium vimineum - Leafless Globe Pea
A common plant of the Esperance region, inhabiting low-lying areas and favouring moist sandy/peat soils around swamps and seepage areas. Mostly growing to around 60 cm (2') in height, with an upright sedge-like habit. The flowers are multi-colored with red/gold and orange predominating, but with a bright yellow center at the base of the large (standard) petal. There are other similar looking Sphaerolobium species in the district, sometimes growing side by side, but are easily separated by flower color alone, although there are other differences.

Sphaerolobium plants are so named because of the spherical (ball) shaped seed pods, which are usually quite hard and difficult to open when mature. Depending on favourable weather, they can flower from August to December, but October/November would be their main period.