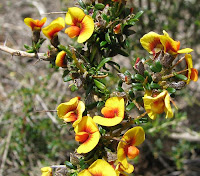 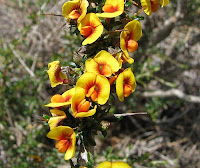 A small shrub to 1 metre (around 3'), although usually closer to half that size. As its name suggests, Mirbelia granitica is found on and around granite outcrops, particularly the more level, low-lying ones in the mallee region to the north and NE of Esperance. A widespread species but rarely occurring in large colonies, however it is more common than the WA FloraBase distribution map would suggest. This may be due to the exceedingly sharp needle like thorns spread along the branches, making botanical collections rather a bloody affair unless you are equipped with secateurs and gloves.

Despite being very prickly, it is a pretty open shrub with small bright yellow and red flowers along the stems. These bloom (depending on seasonal rainfall) from August to December.