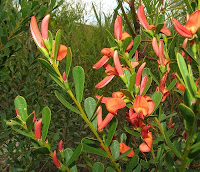 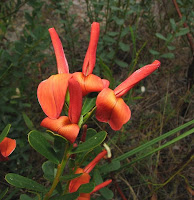 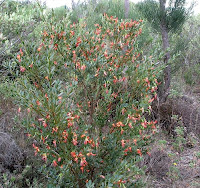 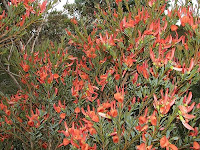 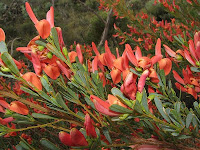 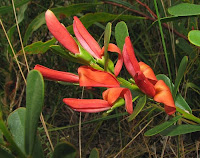 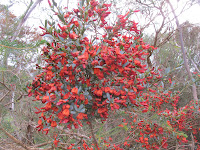 Templetonia plants are closely related to plants from the Bossiaea genus and are distinguished by their long narrow flowers, whereas most plants in the Papilionaceae family, have a much broader standard (large upright petal). Just by explanation, pea-flowers are also classified under the Fabaceae family. These two families are from different classification systems, although most families and genera are much the same in either system. Different authorities sometimes use different systems and the WA State Herbarium basically use the 'Airy Shaw' 1973 system and therefore place pea flowers into Papilionaceae and as my blog only deals with WA species, I therefore follow the WA State Authority. As a by-the-way comment, most other State Herbaria use the 'Cronquist' 1981 classification, so place all pea flowers into Fabaceae.

This species, commonly known as Cockies Tongues, is largely restricted to stabilised calcareous soil where it can grow to 4 metres (13') in height, but is usually around 2 metres (little over 6'). In hollows they can grow into thickets, particularly when over limestone, or as compact isolated shrubs on the sides of steep, stabilised, but very exposed tertiary dunes. Also found in mallee areas, growing in sandy loams over gravel or limestone.

The flowers are a brick red and are around 4 cm (11/2") in length, aided by the standard bending back over itself as it matures making them highly visible from some distance. Flowers are recorded from April to November, but Templetonia retusa is very widely distributed, covering several climate zones from the WA/SA boarder, then around the coast almost to Carnarvon (over 2,500 km or 1550 miles) therefore flowering times are likely to vary.  In the Esperance district, March to July would be the main period, although the timing of seasonal rainfall can make a big difference.