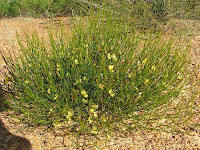 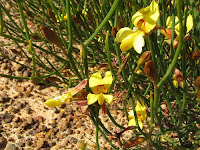 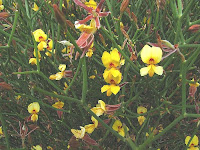 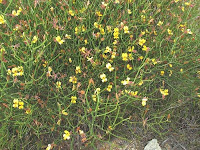 An unusual looking shrub with forked broom-like stems and large bright yellow flowers with red markings on the floral standard. You would think that a shrub (to 2 metres or over 6', but more often half that size) and apparently leafless, would blend into the mass of vegetation types common to heathland of the highly floriferous southern region of Western Australia, but it does not and this may be due to its neat home garden like shape. Another difference to most other plants in this environment are the stems, which are termed cladodes. These are like flattened stems that function fully as a leaf, but the true leaves are little more than scales at the base of each cladode.

Jacksonia viscosa is a common species favouring the moist but well-drained heavier soils (which may be overlain with sand) of near coastal heathland. They often occur in quite large colonies, but cease abruptly when the soil-type or drainage change, so there are large areas where they do not occur at all, as their preferred growing conditions are somewhat patchy in the region. The flowers are around 2 cm (3/4") in length, but appear larger as the petals either side of the keel grow outwards, giving it a chunky look when compared with most other pea-flowers whose side petals tend to hug the keel, thereby placing greater visual emphasis on the standard alone.

A long flowering shrub and flowers can usually be found at most times, although they mainly bloom after rain during the warmer weather, so spring/early summer, and again late summer/autumn would be the best time to view them.