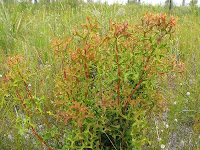 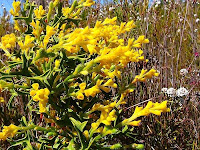 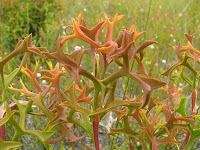 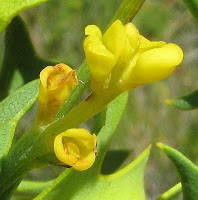 Synaphea spinulosa subsp. major
Attractive small shrubs usually with deeply divided foliage and bright yellow flowers, however they can be very tricky to positively identify. Most features on these plants can be highly variable and to the casual observer, one species can look very much like another. The only definite way to separate them is by the shape of the tiny pollen presenter (stigma like top to the style), which for most people will require an eye-glass or microscope.
Synaphea spinulosa has three subspecies, but the other two are a long way to the west and nowhere near the Esperance region. The local subspecies major, has a broad pollen presenter (although more narrow when dry) often with a constriction in the middle to produce two wide angled lobes, one either side at the top. It grows to around half a metre (1'6") and is taller than a similar looking species S. media. Also if you happen upon them during their main flowering period, most of the mature Synaphea spinulosa subsp. major plants, will have branched flowering stems, but at other times they may not and other features need to be investigated.
The Synaphea genus of plants seldom occur in large colonies, but more commonly as small groups within a suitable habitat, so you tend to stumble upon them. The Synaphea spinulosa subspecies major, favours sandy soils over laterite or granite, plus sandy rises around ephemeral swamps and flood plains; it flowers from August to November, although odd flowers can be found as late as January, but these are the result of late rains and are not the norm.