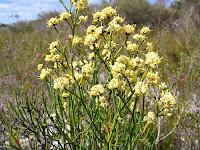 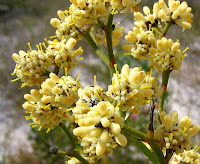 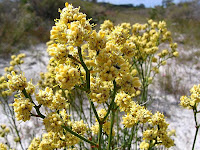 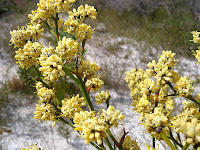 Previously known as a variety of Stirlingia tenuifolia, this shrub has been reclassified to species status, and to the name it was originally known when first described by the famous botanist Robert Brown who visited the region in 1801. The plant is a member of the heath community and can be found in sandy soils, sometimes overlying laterite or rocky substrate.


I have only encountered this species in small scattered colonies and usually 2-4 years after a bushfire has reduced other more dominant shrubby vegetation. Growing to a little over half a metre (around 2') it is quickly smothered by other shrubby heathland species and so probably requires a reasonably frequent burning cycle.


The more obvious differences between Stirlingia anethifolia and S. tenuifolia, are the darker yellow flowers and much thicker (diameter) foliage of the former, and the distinctively fine foliage of the latter. The flowering period of both species is from September to November.