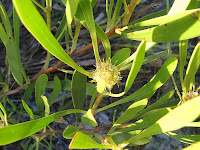 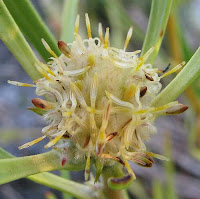 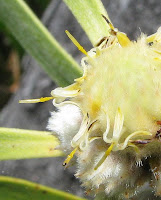 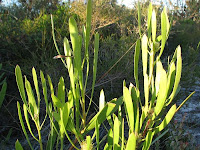 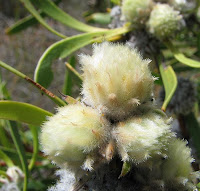 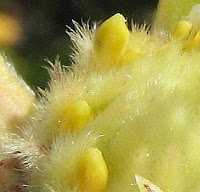 A common shrub of around a metre (3'), although in sheltered locations it can reach twice that height. Very adaptable regarding habitat, but the greatest number of plants can be found in deep sandy soil in flat low-lying areas surrounding ephemeral swamps or where there is subsurface moisture, however they will venture to higher and lower altitudes, in both drier and wetter habitats. Also found in sand overlying laterite and granite, so a very widespread heathland species.

You could be forgiven for thinking that this plant never flowers as you need to look very closely for the tiny flowers, which vary from 2-4 mm (around 1/8") in length and blend into the similar colored, compact hairy bracts of the flower head. The flower heads are usually around 1 cm (3/8") diameter and mostly in a terminal three-headed cluster (occasionally singularly in young plants, or in the upper leaf axils of more mature ones).

Although the flowers are small and designed for insect pollination, they are quite attractive in their setting. Many people think Western Australia is only adorned with big, bright and spectacular flowers, but there are less eye-catching plants that are also well worth a second look, as they successfully compete with the more spectacular ones for the attention of pollinators and indicate the huge diversity of species growing side by side in the highly floristic regions of Western Australia.

Flowering occurs anytime from August to January or even later if there are summer rains. The flowering heads are commonly encountered in all stages of growth, so the blooms can usually be found with little effort. The leaves, commonly between 3-10 cm (1"-4") in length, are a yellowish green and stand upright from sturdy stems. An unusual plant and well worth investigation.