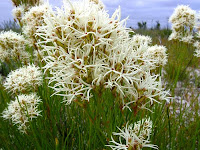 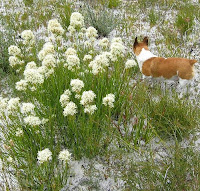 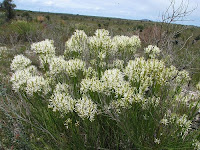 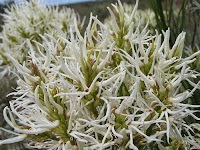 A widespread shrub of the Esperance district, although usually represented by individual plants rather than occurring in what you could describe as a colony. Mostly it grows to around a metre in height (little over 3'), but is recorded to 2 metres elsewhere, and in this region it seems to prefer deep sandy soils, being part of the heath community and often associated with Banksia speciosa.


Like many smokebushes this species produces a spectacular floral display with terminal plumes of cream or white flowers that can be seen from a considerable distance. The flowering period has been recorded from August to January, but around Esperance September to December would be the norm and when they can be seen in their prime.


Even when not in flower it has an exotic appearance, with long stout vertical pale yellowish/green foliage and held on sturdy upright stems, to make you momentary wonder what sort of unusual plant you have discovered.