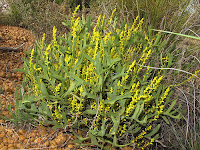 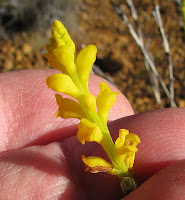 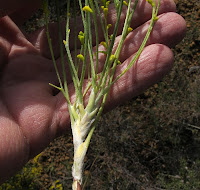 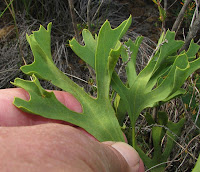 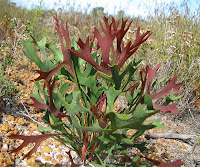 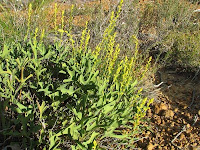 Synaphea petiolaris subsp. petiolaris
Common in the Perth and southwest districts, but less so in the Esperance region except on gravel soils where often encountered.  It is also recorded from Israelite Bay (180 km east of Esperance). There are two other subspecies, but they only occur in the southwest of the State and north to Perth, so a long way from Esperance.
Synaphea petiolaris subspecies petiolaris is an appealing tufted species to about half a metre (1'6") high with soft, broad divided foliage that is held upright on (to) 25 cm or 10" petioles (stalks) . The bright yellow flowers although small and spaced, are located on taller vertical stems and contrast well with the broad green foliage (red/brown when new). Locally they are to be found in eroded rocky habitats (over laterite or granite) and can be most attractive nestled at the base of exposed boulders.
The pollen presenter (stigma) of the flower, is distinctly horned and partly extended beyond the perianth (flower) opening, so easily seen. Flowering is recorded from July to December, but with such a widespread species it will vary slightly from district to district, particularly in years of unseasonable rainfall and rapidly drying habitats. Locally, flowering would be contained within the months from August to November.