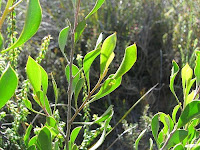 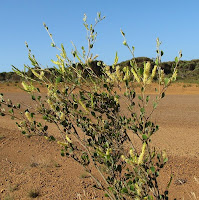 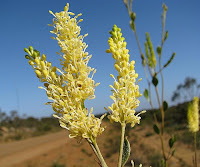 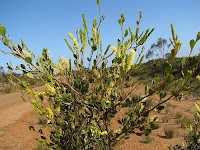 
There are three subspecies of Grevillea shuttleworthiana, but subsp. obovata is the only one in the Esperance region, the other two are spread across the inland to the Geraldton district. The colony I encountered would probably be the most easterly occurrence of this species and certainly the closest to the south coast (25 km). The colony is sited 100 km WNW of Esperance on the summit of a granite outcrop, which at that location has a covering of a sand/clay loam and possibly laterite (gravelly clay).


I had not seen this species before and almost drove past, thinking it was a rod type flowering Acacia with a common locally shaped phyllode (leaf), and being at the end of the day on my way home, it was quite an effort to stop the car to check. The individual flowers of Proteaceae are quite distinctive and nothing like an Acacia, so my initial error was quickly righted and permitted me to add another Grevillea species to my list.


Growing to 2.5 metres or over 8' (although mine were much younger plants and only around 1.5 metres or 5' in height), the growth structure was unusual as the base of the shrubs were quite bushy and largely without flowers, but they had developed two or three much taller (foliated) branched stems to produce the flowers. These were not flowering stems whose only purpose is to produce the flowers, but these would later be incorporated into the central leaved portion of the shrub.


The flowers were arranged in dense plumes of around 7-8 cm (3") and were flowering during December and no doubt would extend well into January. Officially they are recorded flowering from July to December.