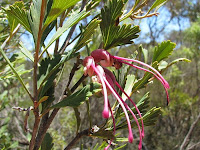 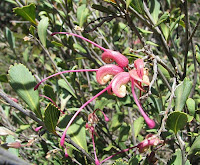 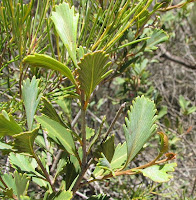 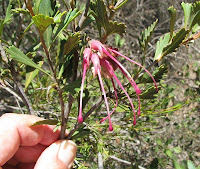 
The leaves of this species are very variable from those shown above (ie, not or only partly divided), to others that divide almost to the central leaf vein and fit more closely to the common name of Comb-leaved Grevillea. The form shown is a spreading shrub to 2 metres (over 6'), although more commonly 1-1.5 metres (3'-5') and found in the upper reaches of the Lort River, approximately 80 km NW of Esperance in sand/clay loams particularly over laterite or other less permeable substrates.

Flowering can be anytime from June to January, although spring would be the main period. Interestingly, shrubs in one area may not be flowering, whilst others not far away will be in full bloom, which might reflect the water holding properties of the soil substrate.

The Comb-leaved Grevillea could be confused with some forms of Grevillea plurijuga, but are easily separated by the size of the leaves, with G. pectinata being much smaller particularly regarding the length of the lower lobes, despite the flowers appearing superficially very similar. 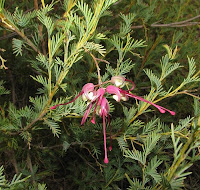 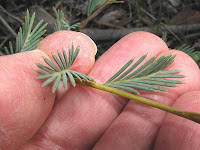 Update 31/07/09
Two photographs of the more common and widespread form of Grevillea pectinata are added. The difference between the two forms are purely in the leaves with one being only slightly divided, whilst the more common form is deeply divided. Of note is the size of the leaf as compared to other species like Grevillea plurijuga that are larger. The length of the lower leaflets of Grevillea pectinata are around 1 cm (3/8") in length.

Posted by William Archer at 4:54 PM