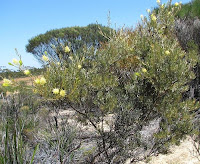 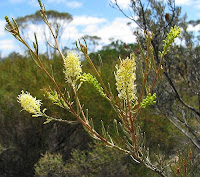 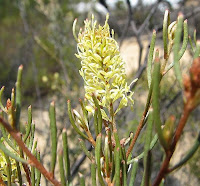 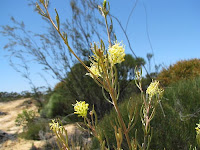 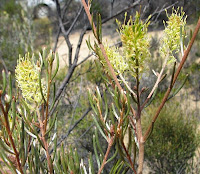 An interesting upright open shrub with thick silver foliage and plumes of yellow flowers. It just reaches into my designated Esperance region where I only know it from a couple of colonies to the northwest (100 km from Esperance). It grows with Grevillea aneura and Banksia elderiana in a shallow sandy soil over laterite (gravelly clay). The habitat is a low eucalypt woodland, with tall shrubs and pockets of mallee heath.


Initially it does not look like a Grevillea, but some other more exotic Proteaceae, although I have since encountered another Grevillea with similar type flowers, which in that case due it its broad green foliage, I thought (when first spotted from a distance) that it may be an unusual Acacia. So I have learnt to never take anything for granted in this florally diverse region.


Usually growing from 1-2 metres (4'-7') in height, with most flower spikes 5-6 cm (2"-2.5") in length. I have been most fortunate that everytime I have visited this Grevillea is it has been in flower, ie from September to January.