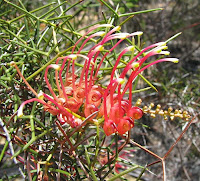 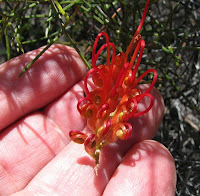 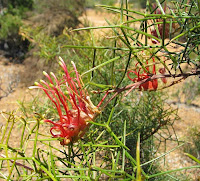 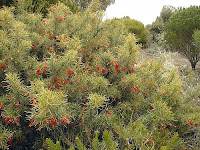 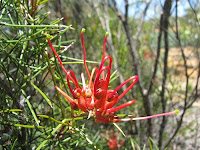 Previously known in WA as Grevillea treueriana, but this species is now known to be restricted to SA. It also resembles Grevillea asparagoides, but this species only occurs between Perth and Geraldton. However Grevillea aneura is an attractive shrub from the mallee region to the north of Esperance that is classified as rare (priority four), but not currently endangered. It is reasonably common in a nature reserve around 100 km NW of Esperance, where it grows to 1.5 metres (5') in height, although it has been recorded growing elsewhere to almost twice that size.

Flowers are scarlet in color and bloom between June and January, the timing dependant on habitat and seasonal rainfall. Interestingly it grows alongside two other unusual species, Grevillea incrassata (co-flowering) and the Swordfish Banksia, Banksia elderiana (flowering a little later). The foliage is a little prickly (although not excessively) and is first divided into three, then each of these leaflets is divided again into another three, making the shrub very compact and tangled, and no doubt very attractive to small nectar feeders who would gain protection from predators within it.

Habitat is a low eucalypt and tall shrubby woodland, with patches of mallee heath; the soil comprises a thin covering of sand over laterite (a draining gravelly clay). Most of the recorded sites for Grevillea aneura are along the same latitude, which is around 70 km from the coast with an average annual rainfall (winter dominant) of 400 mm (1'4").