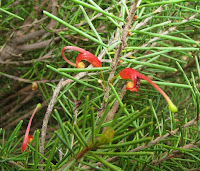 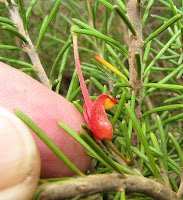 Grevillea haplantha subsp. haplantha
This Grevillea is normally found far to the north in the Kalgoorlie region, but an odd and well separated record has been made in the Esperance district close to mine. The plants I encountered were near a gravel quarry approximately 75 km NW of Esperance, where a number of bushy, low domed shrubs were growing to 1 metre (over 3') in height and over 2 metres wide (7'). The slightly prickly conifer-like foliage hid the bright red flowers that were either singular or in small clusters. Apparently further north this shrub can grow to 3 metres (10') in height and presumably with leaf drop due to age, the flowers would be more visible.
The habitat was a clay/gravel mixture that would be wet in winter and very dry through summer. Apart from the neat compact shape, it is not the sort of plant that would make you want to stop to investigate, and had there not been other species I wished to check, I probably would not have stopped either. It was only general curiosity on my part that made me part the foliage to reveal the flowers, so it is probably more common, but overlooked in the region than officially recorded.
There are two subspecies, but the other is even more distant than Kalgoorlie, being inland towards the Geraldton district. This subspecies haplantha, has been noted flowering anytime from June to December that would probably be dependant on the timing of seasonal rainfall. 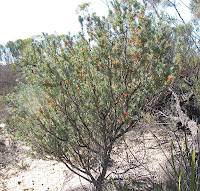 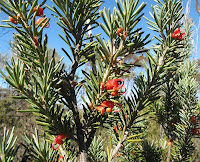 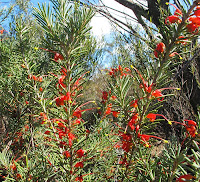 Posted by William Archer at 3:30 PM