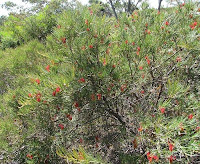 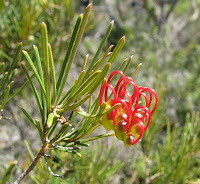 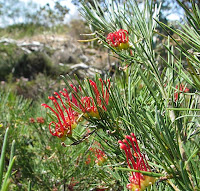 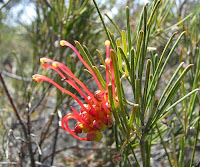 This Grevillea has two subspecies and both are recorded from the Esperance region. The most common and widespread is subspecies lemanniana which grows east, west and north of Esperance favouring the sandy loams typical of the wheatbelt, although it can also be found in coastal heath growing on flattish low-lying sandy areas covering a gravel or heavy clay loam. The other subspecies is Grevillea concinna subsp. concinna that is mainly found to the east of Esperance in laterite (gravelly clay), which in turn may overly granite.

The main difference between these subspecies revolves around the leaves:
Subspecies lemanniana has small curled hairs on the leaf underside and the central vein is always visible between the revolute (strongly recurved) leaf margins. The leaf margins are also irregular, but an eye-glass is required to see these features clearly.

Subspecies concinna has small straight hairs on the underside of the leaf and the central vein is often hidden by the revolute leaf margins (although not always). The leaf margins with this subspecies are quite smooth.

Grevillea concinna subsp. lemanniana is a spreading bushy shrub to 1.5 metres (5') in height although often shorter, the flowers are bright red and (often) yellow, and arranged in neat toothbrush-like rows. Commonly found in open eucalypt/shrub woodland or in shrubby heath. Flowering is quite variable (depending on the timing and extent of seasonal rainfall) and can be found in bloom anytime from July to January.