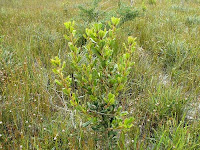 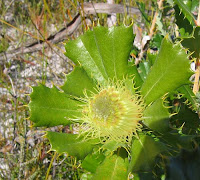 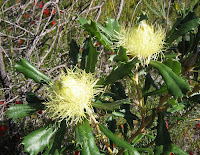 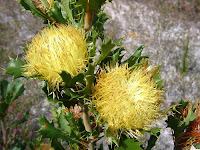 Wedge-leaved Dryandra - Banksia obovata
Previously known as Dryandra cuneata, it is a prickly open shrub of around a metre (3') in height, but can on occasion grow to twice that size. As a common member of the heath community, it mostly grows on low-lying sandy soils particularly with sub-surface seepage such as raised sandy areas on flood plains or around granite outcrops. In these habitats it can often be found with another ex dryandra, Banksia nivea.
The prominent cream or yellow flowers of around 6 cm diameter (over 2") are visited by the smaller honeyeaters and numerous invertebrates. Flowering usually begins after good autumn rain (March to May) and continues through to October. 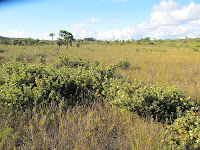