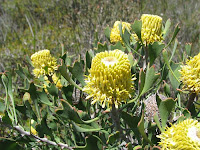 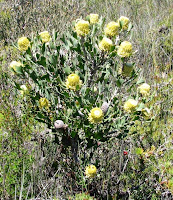 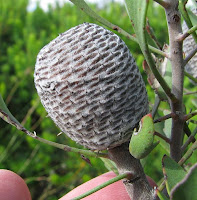 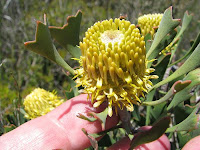 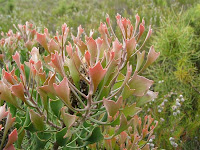 
A common shrub of the Esperance region in near coastal heath. It is very adaptable growing on sandy soil in low-lying areas around freshwater swamps, granite outcrops or flood plains, to deep sand on heath covered hillsides. It also grows in sand over heavier gravel soil, or limestone, where sub-surface moisture is retained for longer periods, but the surface area remains dry and well drained.


Generally the Barrel Coneflower (named after the shape of the seed capsule ie, the cone) develops into an open shrub of around a metre in height (over 3'), although it can reach 2 metres in favourable conditions. The attractive non-prickly foliage usually has pronounced three lobed leaves with soft pink/red new growth, although some forms produce a lime green coloration.


The showy terminal cream to yellow flowers (around 4 cm or 11/2" diameter) are conspicuous from a distance to readily attract birds and insects during September to December when they normally bloom.