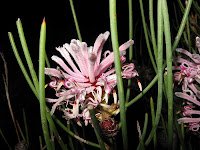 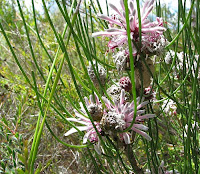 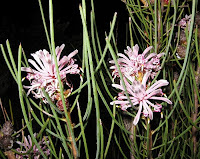 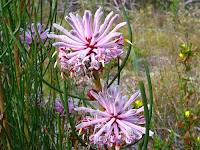 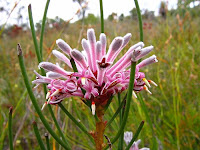 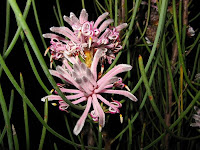 A small open shrub usually less than a metre (3') in height, with beautifully color coordinated flowers of red, soft pink and grey. It is very common in the Esperance region, favouring low-lying areas around freshwater swamps, on flood plains and granite outcrops, but will also grow in deep sandy soils on hillsides as part of the heath community.


The Isopogons and Petrophiles are very similar in general appearance, but are divided into separate genera by the scales on the cone. With Isopogon, the scales become detached and fall from the cone as it disintegrates to release the seed, whereas with Petrophile, the scales are not dropped but open like a pine-cone to release the more flattened seed.


The long (10-20 cm or 4-8 inch) rounded (terete) foliage of Petrophile teretifolia is the basis for its botanical name with no reference to the (4 cm or 11/2" diameter) strikingly colored flowers, however broad reference to foliage type within this genus is quite pronounced so it is not overly surprising. These flowers in my opinion are most appealing and can be readily found from October to January ie, over the holiday period.