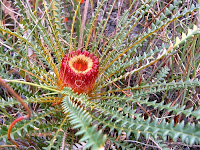 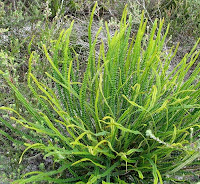 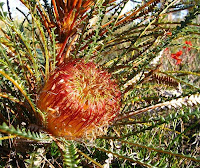 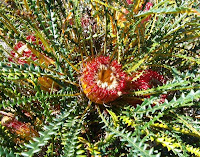 
Previously known as Dryandra nivea, this pretty tussock shaped small shrub of usually less than 1 metre (3') in height (commonly about half a metre), has attractively lobed 20 cm (8") long arching green leaves, plus numerous flowers (4 cm or 11/2" diameter) of various shades of red and suffused with yellow/cream that are snugly nestled within them. Its preferred habitat around Esperance, is the sandy/peat soils over clay on the drainage/flood plains between ephemeral swamps, there it can be so numerous (2-3 years following bushfires) as to completely cover the ground for hundreds of square metres.

I have noted many of the smaller birds like the Western Spinebill (honeyeater) Acanthorhynchus superciliosus utilising this plant, but the dense foliage would also provide safe harbour and an excellent food supply for numerous invertebrates and even small ground dwelling mammals. The flowering period is from July to October.

Banksia nivea has three subspecies, but there is only one in the Esperance region, the other two are restricted to the Perth and SW region.