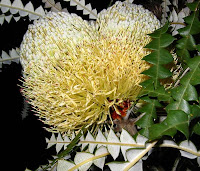 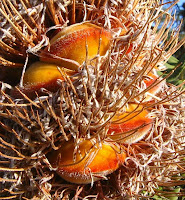 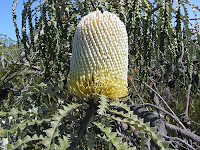 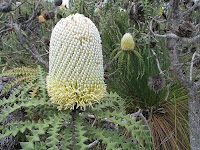 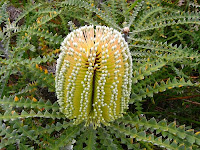 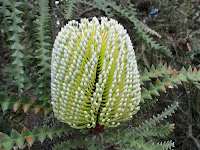 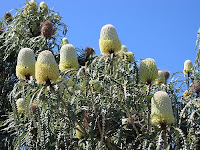 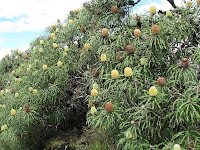 
The Showy Banksia is the dominant Banksia of the Esperance coastal region, growing 4-8 metres (12'- 25') in height and bushy to ground level. Regenerating from seed after bushfire, they grow quickly and usually flower within three years. They produce large composite blooms to 15 cm x 7.5 cm (6"x 3") that are made from hundreds of small tubular flowers that provide nectar for honeyeating birds, the honey possum and a vast array of invertebrates. The small flowers if pollinated, develop into large (initially orange) seed follicles that are then eagerly sought by the White-tailed Black Cockatoo who rip into them in search of grubs and seed.


As these large shrubby banksias approach maturity, the weight of their chunky seed capsules weigh down the outer limbs to form tangled arches, with some reaching the ground. All foliage at this stage is confined to the outer parts, so inside this large bushy shrub is quite open, except for the leafless arching branches. Although difficult for people to scramble through, it provides ideal habitat for small to medium sized birds who can travel around at considerable speed, thus providing protection from larger birds of prey, plus making an ideal place to nest. So the showy banksia is of considerable ecological importance, particularly when combined with its long flowering period that is most prolific during spring and autumn, but often has some blooms throughout the year.


The preferred habitat of the Showy Banksia is the deep white sands common to the acid sandy heath zones, although it can also be found in calcareous sandy soils immediately over limestone. It is not found on heavy soils.


I have added three photos of flowering inflorescences; one is a rare twin that is branching from the common central axis, whilst the others show the vertical or spirally arranged small flowers (which can spiral in either direction). Flowers are typically more densely packed than these examples, but they clearly show the structure.