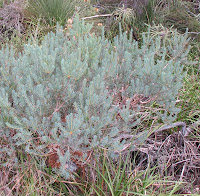 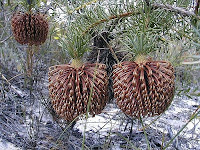 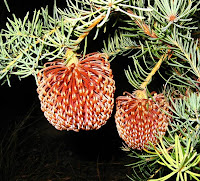 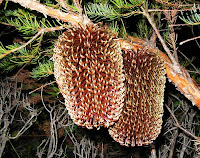 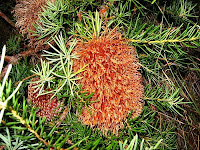 
One of the few banksias with pendant flowers, which are sought for their nectar by honeyeating birds and the honey possum. A bushy shrub to 11/2 metres (5') in height and often grows in association with the Showy Banksia, B. speciosa and is commonly found growing under and around them. It is also found in deep (acid) sandy soil in more exposed heath, plus in low-lying areas around ephemeral swamps and flood plains, although only where the sand or sandy loam is better drained. It will also grow in heavier pebble soils, so being adaptable it is quite common in the region.

At first, the flowers are usually a pinky red, but change to a deeper red or even purple before becoming a rusty red at maturity. Flowering is from November to February, but this timing is important for the tiny honey possum, by providing a good nectar supply between the main flowering periods of other species that are less productive at this time of year. The pendant composite flowers are generally oval in shape and up to 10 cm (4") in depth. The plants are normally killed by bushfire, but readily reproduce from seed.