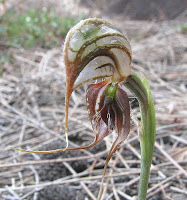 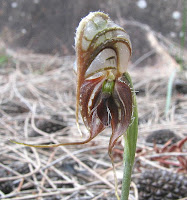 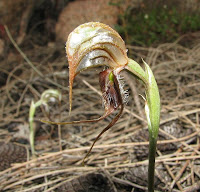 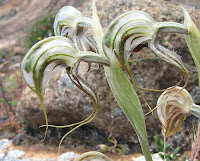 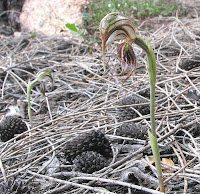 
This was an unexpected find as according to the distribution map produced by the Perth Herbarium, it is a range extension to the east of over 150 km (see update 23/12/08 below). These plants were encountered at Mt. Ridley (67 km or nearly 42 miles) NNE of Esperance.


A very distinctive orchid with nodding flowers and long fine untidy sepals that seem to point in all directions. Its name is derived from the spoon (spathulate) shaped labellum, although that is probably the last feature you would notice. Usual flowering period is during September and October.


Two well separated (several hundred metres) small colonies each of only a few plants were growing in shallow-ish soil over granite, one in the open with Borya constricta and the other under Allocasuarina huegeliana, the Granite She-oak. All plants had an aged decomposing basal rosette indicating the leaves had developed long before the flowers.

Update 23/12/08
Going on the 'Orchids of Western Australia' publication by Andrew Brown et.al., this orchid is similar to a couple of other species in the Mt Ridley region. From the description given, P. ciliata - Hairy Rufous Greenhood is most like this orchid and distinguished by the hairy sepals and petals, which the photographs above clearly show. However the habitat described for this plant is quite different "Wandoo woodland and mallee heath." Whereas the orchids I photographed were on a granite outcrop, although in a mallee area. So possibly this may be the species, but in a different habitat.

The other similar species is Pterostylis sp. 'striped' - Striped rufous Greenhood, an undescribed species that is actually recorded for Mt Ridley and is distinguished by having 'fawn-striped sepals', but there is no mention of other features, plus the flowers seem to be a little on the small side.
So I shall leave this orchid as Pterostylis spathulata until further information becomes available, as it does have a spathulate labellum and is similar in most other respects, although no mention of hairy sepals and petals is made.